I used to believe that Sweden was just a beige boring country. Because growing up in a suburb to Stockholm, beige and brown shaded buildings were basically all I saw. Turns out, I was just uneducated! Sweden is full of cute little towns, bursting in color, just waiting to be explored.

So if you’re a color-person like myself and are planning to visit Sweden soon or in the future: look no further. Here’s the ultimate list on where to find all the colorful houses in Sweden.

Let’s start with the capital. It’s not where you’ll find the most color, unless you’re into yellow/beige, but there are a few spots that stand out:

Right in the center of Gamla stan (old town) and jam packed with tourists unless you go there early in the morning. This is probably the most famous spot in Sweden.

A hidden gem in the posh part of the city. Home to filthy rich people and embassies.

This is probably the cutest little summer town you’ll ever see. The town center is packed with tiny little colorful houses that are simply adorable.

In the very south of Sweden there’s a small town called Ystad. It is a bit similar to Simrishamn, but slightly bigger. The town center here is also packed with beautiful colorful streets.

Lund is very similar to Ystad, both in building style and geographical location (south of Sweden). See one and see both basically. Lund is a little bigger and is mostly famous for it’s university.

Photo: Travel-monkey (who wrote an amazing post about studying and living in Lund)

Sigtuna is Sweden’s oldest city so of course it also holds a few beautiful historic buildings. You’ll find it only one hour from Stockholm and can access it by boat or bus from the capital.

The third largest city in Sweden is home to a lot of pretty cool street art. Rather than listing all of them (there are quite a few), I’d recommend you check out this post by my fellow travel blogger colleague and Swede Alex (aka The Swedish Nomad), that lists all of them as well as the exakt addresses. 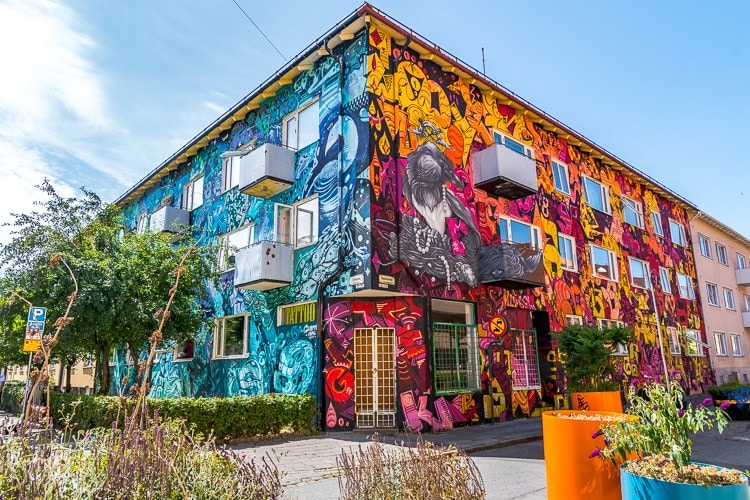 Smögen is an old fishing village whose famous brightly painted fishermen’s cottages and boathouses are now boutiques offering a range of clothing and mementos. You’ll find them at the end of the pier (or beginning, depends where you start) right by the Ängebacken cliff.

The kilometre-long beaches around the Skanör-Falsterbo peninsula are lined with picturesque caramel-coloured bathing huts, just adorable! If you’re in the south of Sweden (and have access to a car), make sure to pop by this beutiful white sandy beach.